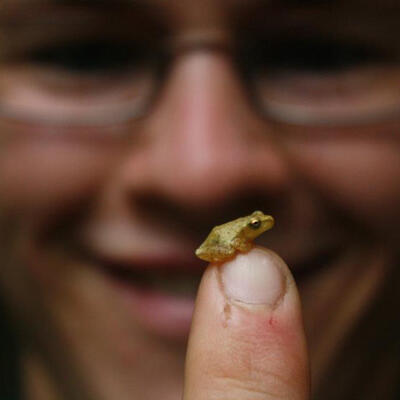 Endocrine disruption is occurring early on in suburban frog development and that these abnormalities are associated with high frequencies of phytoestrogens, likely from heavy landscaping.

In recent decades there has been a growing focus on endocrine disrupting chemicals (EDCs), both naturally- as well as anthropogenically-derived, which alter hormonal regulation in animals. EDCs can have effects like increases in breast cancer proliferation in humans, infertility in female livestock, and the production of eggs in male frog and fish testes (testicular oocytes – TOs). Research has traditionally focused on agricultural landscapes and large wastewater treatment facilities as sources of these contaminants in the environment. However, recent work has found that male frogs in suburban neighborhoods have higher frequencies of endocrine disruption than frogs from other landscapes. As of yet we have limited knowledge as to which contaminants occur in suburban waterways or as to what their effects are on early development. Here, I assessed sex ratios and estradiol levels in metamorphosing green frogs. I used GIS software to locate suburban (treatment) and forested (control) ponds in southern Connecticut, measured sex ratios by assessing gross gonadal morphology, and am using enzyme-linked immunosorbent assays (ELISAs) to quantify estradiol and testosterone levels in whole-body frog extracts. Here I show that endocrine disruption is occurring early on in suburban frog development and that these abnormalities are associated with high frequencies of phytoestrogens, likely from heavy landscaping.