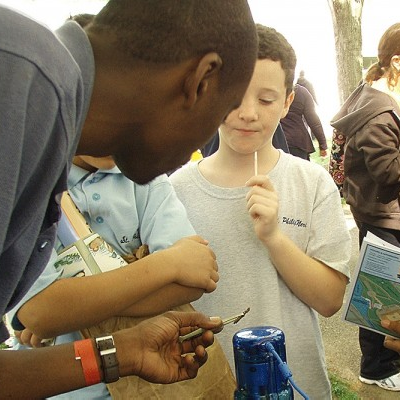 The two-dimensional (2D) hydrodynamic model, River2D, was used to model the instream hydraulic conditions of a 150m reach on the main stem of Pennypack Creek, Philadelphia, PA, USA. To predict how instream habitat restoration structures would affect instream flow variability and weighted usable area (WUA) for invertebrates, design specifications for a j-hook rock vane and a double-wing flow deflector were modeled into the bed topography of the study site. Simulations for each modeling scenario (plain-bed, j-hook modified, wing-deflector modified) spanned a range of discharges from low flow (0.07 cms) to bankfull (2.05 cms). Hydraulic parameters and (WUA) for three functional feeding groups (FFG) were compared between each of the three modeling scenarios. Results indicate that the model was capable of resolving meso-scale variation in flow patterns caused by the different deflectors and results of 2-way ANOVA show significant differences in (WUA) between both (FFG) and modeling scenario. The (2D) modeling approach applied to this stream reach has the potential for use as a management tool whereas, reach-scale hydraulic and ecological changes caused by disturbance (“hydrograph flashiness”) or manipulations in channel bed topography can be evaluated under steady-state conditions or using stage-discharge relationships. For reaches on gauged streams this could play a significant role in making predictions of hydraulic conditions and their effects given alterations in flow regime from anthropogenic influences and watershed management practices. If such an approach was scaled-up to encompass an entire watershed and coupled with sediment transport models such as HEC-RAS, it would allow for more thorough evaluation and monitoring while providing a framework for adaptive management.