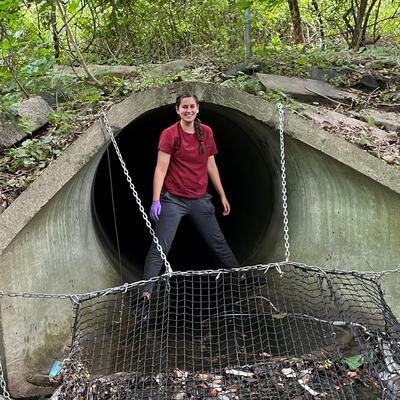 Variation of Microplastic Concentrations in Urban Stormwater with Rainfall Events

Microplastics (MPs) are pervasive anthropogenic pollutants that are ubiquitously present in the environment. Sources and sinks of MPs in the environment are not yet well defined, especially in regard to urban waterways and stormwater runoff. In order to better understand MP fate and transport, the concentration, flux, and temporal trends of MPs in stormwater must be better constrained. Here, MP concentrations in stormwater runoff in the watershed of Beaver Pond in New Haven, CT are measured during short-term rainfall events in order to better understand MP fate and transport in urban waterways. MP concentrations ranged from 4 - 930 particles/L for the 100 – 5000 µm size fraction, with up to a 3500% increase in concentration during peak rainfall when compared to baseline measurements. Tire wear particles (TWP) were found to be a dominant particle type in urban stormwater, contributing to 76% of all particles detected. MP concentrations strongly correlate with total suspended solid (TSS) concentrations, clearly demonstrating a first flush effect for this pollutant class. Increases in MP concentration during rainfall events indicate non-uniform rates of this pollutant traveling through urban waterways, establishing that the effects of rainfall must be considered when calculating MP budgets for urban systems.