The Hixon Center, along with the Urban Resources Initiative and a number of partners, works on a series of bioswale projects in the New Haven area. In-depth information on the following projects is available below:

Before green infrastructure intervention, heavy rain events in the West River sewershed would result in combined sewer overflows into the West River. In a combined sewer system, rainwater runoff, domestic sewage and industrial wastewater are transported in the same pipe and can discharge excess waste water into nearby waterways during times of increased volume. This can destabilize ecosystem health and functionality.

Hydrologic instruments attached to v-notch weirs (see image below) measured flow at the outlets of these storm sewersheds in order to analyze how much water was coming in and how much was leaving. Instruments were also installed directly in four of the bioswales to see how water moved through the systems. Water quality characteristics like metals, nutrients, and conductivity were measured on samples taken over the course of selected storms. 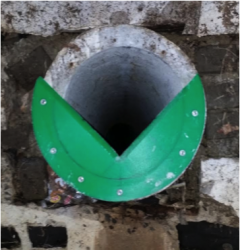 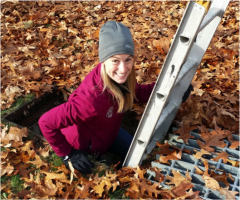 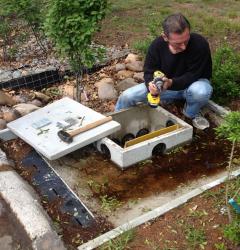 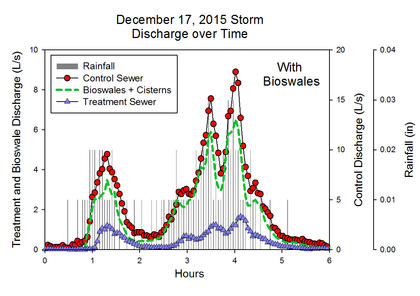 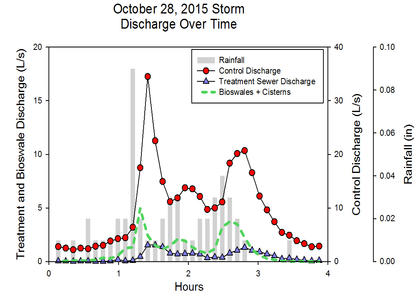 Bioswales captured over 50% of stormwater from West Park Avenue during this one inch December storm and 0.5 inch October storm, significantly reducing the amount of water that traveled to the treatment sewer. These figures show water discharge during the storms at the three locations: green infrastructure is represented by the green line, the treatment sewer (where bioswales were installed) is represented by purple triangles, and the control sewer (where no changes occurred) is represented by the red circles. The difference in water traveling to both sewers is clear by comparing the red line (control) and the purple (treatment).

By comparing the treatment and control sites, researchers from Yale F&ES were able to measure the effect of green infrastructure on water quality and quantity. The project achieved all of its promised deliverables, and the results were reported as a manuscript currently under review for publication in the Journal of Environmental Management.

Before green infrastructure intervention, heavy rain events in the Newhallville neighborhood would lead to serious stormwater flooding of streets. Since the Newhallville neighborhood is in a separated sewer system, stormwater runoff from these sewersheds does not contribute to combined sewer overflows as it does in the West River Park site. However, flow reduction in the separated storm sewer is still an important metric since it influences pollutant loading and flooding, which are two concerns for the City of New Haven.

URI’s GreenSkills team installed seven bioswales in the curb strip along Daisy St. and Watson St. This neighborhood was selected because of its location in the uppermost reaches of a separated storm sewer system, which allowed researchers to more accurately measure the flow and pollutant reductions associated with bioswales implementation. The study site consisted of three small sewersheds – two on Daisy St. and one on Watson St. Researchers conducted monitoring of stormwater discharge and water quality in the sewersheds for 5 months prior to bioswale installation and 8 months after to evaluate the performance of bioswales in managing and treating urban stormwater. 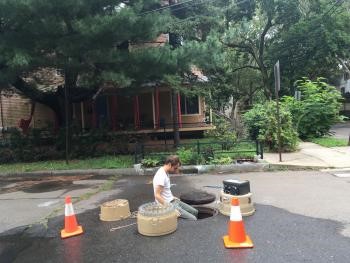 Similar to the West River Park site, v-notch weirs and water level monitors were used to continuously monitor discharge from each of the sewersheds. The researchers also utilized flow measuring devices at the inlet to three of the seven bioswales – one in each sewershed – to determine flow into each bioswale. Water quality parameters, nutrient concentrations (nitrogen and phosphorous) and total suspended solids (TSS), were measured at the outlet of each sewershed during select storm events before and after bioswale implementation.

The project reduced stormwater runoff and documented bioswale capacity in relation to drainage area. By developing a rating curve for storm sewer discharge and rainfall amounts before and after bioswale implementation (see figures below), researchers determined that the bioswales prevented approximately 885,000 gallons of stormwater from entering the sewer system annually. Lower discharges were also associated with reductions in mass fluxes of nitrogen (N-NO3), phosphorous (P-PO4), and TSS. During specific events where water quality was measured, these reductions reached levels of 63%, 67%, and 89%, respectively. 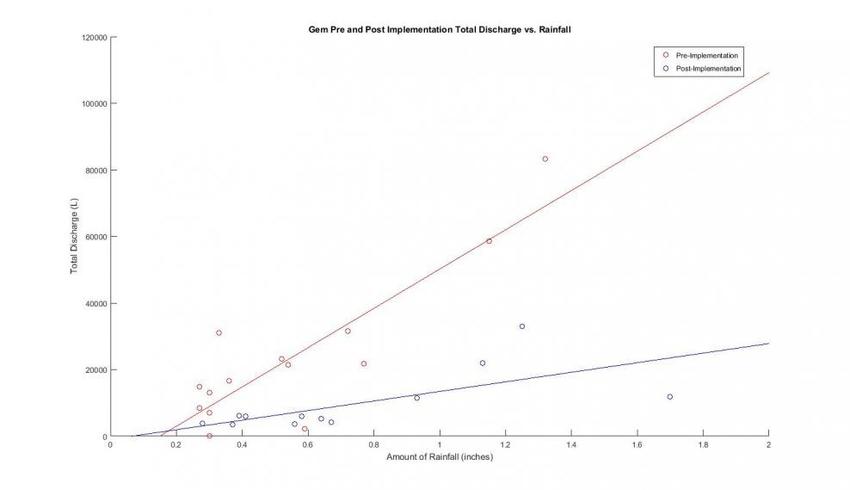 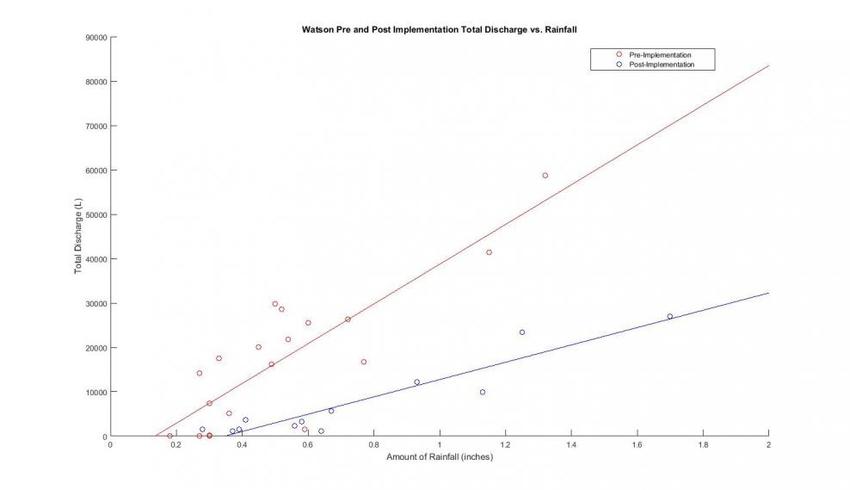 The above rating curves for storm sewer discharge and rainfall amounts before and after bioswale implementation show that the bioswales prevented approximately 885,000 gallons of stormwater from entering the sewer system annually.

The results from the Newhallville Project site are encouraging as the City of New Haven is currently installing 200 bioswales in the Downtown Watershed Project to reduce flooding and improve water quality in the harbor. Affirming the findings from the West Park Project, these results demonstrate that New Haven’s sandy soils have a high infiltration capacity, which not only reduces runoff but also pollutant loading. The City of New Haven are using the results from this study in their siting, sizing, and design of the larger-scale implementation underway.

This research has added significant value in high-visibility education, demonstration, and community engagement efforts, building a case for additional investments in New Haven and other cities. It serves as one of the first studies on bioswales in Connecticut, and helps researchers better quantify the effectiveness and feasibility of green infrastructure implementation. The results will also be communicated via a peer-reviewed publication.

In New Haven, large areas of impervious surface and compacted soils lead to significant flooding of contaminated stormwater in urban residential, commercial, and industrial neighborhoods. This is particularly problematic in downtown near the train and police stations. Funding to the City of New Haven from the Storm Sandy Recovery Program of the CT Department of Housing made possible the installation of up to 200 bioswales to reduce stormwater flows to separated and combined sewers thereby reducing flooding and improving water quality in receiving water bodies, such as the New Haven Harbor and Long Island Sound.  URI working in partnership with the City of New Haven and Emerge constructed 100 bioswales in 2018-2019, and plan to install an additional 75 bioswales in the downtown area in 2020.

It is known that bioswales reduce peak flows, cleanse water, and decrease contaminant loading by diverting flows to the groundwater system, but the quantitative benefits are not well documented, especially at the scale of entire neighborhoods.  As a key component of this project, Yale F&ES researchers are evaluating the effectiveness of green infrastructure at a large-scale by continuously measuring flow at the outlets of two sewersheds that received about 50 bioswales each. They are also continuously measuring flow through 10 individual bioswales to assess the influence of soil permeability in relation to local drainage area and combine the flow data with measurements of contaminants to quantify the amount of pollution prevented by bioswales.

The monitoring component of this project is designed to evaluate and optimize the effectiveness of bioswales to handle stormwater and improve quality by reducing street runoff and combined sewage. The study, performed by Yale F&ES researchers, compares both individual bioswales and entire sewersheds before and after bioswale installation by measuring water entering individual bioswales and discharge leaving sewershed outlets. Two sub-sewersheds were selected for study from the downtown New Haven sewershed area, where 99 bioswales were installed in 2019. (See Figure 1). The two sub-sewersheds, centered on Elm and Chapel Streets, currently contain 196 and 125 catch basins, which handle all of the runoff draining to the streets in the sewersheds. 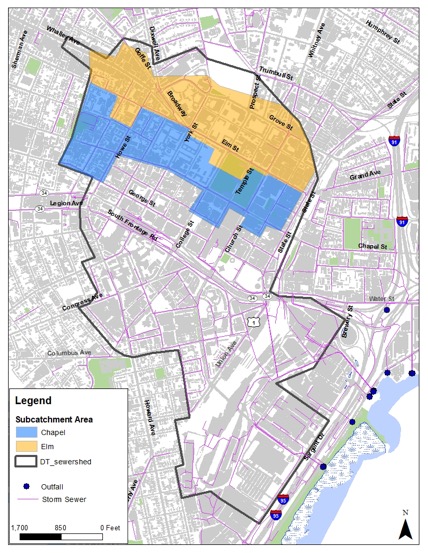 To better understand the effectiveness of bioswales, researchers are continuously monitoring flow and precipitation at the outlets of the sub-sewersheds and individual bioswales. In May 2018, Yale Professor Benoit installed state-of-the-art Doppler ™ flow meters at the outlets of the Chapel Street and Elm Street sub-sewersheds. With these flow meters, flow, depth, and temperature measurements have been made continuously every 6 minutes since installation. These measurements allow researchers to carefully characterize the hydrology of the combined sewer systems under “before” and “after” conditions in the sub-sewersheds. Localized precipitation is also monitored on-site with tipping bucket rain gauge (Rainwise TM) located within one of the two sewersheds, which are contiguous.

Individual bioswales receive runoff from the impervious areas that drain to them.  However, the amount of water that they can infiltrate to underlying soils strongly depends on soil permeability. In the simplest case, the effectiveness of the bioswales is expected to be directly proportional to permeability.  Many factors can alter this simple relationship, and Yale F&ES researchers are testing this relationship across 10 bioswales covering the full range of soil permeabilities available to us in the downtown study area. Researchers are measuring soil permeability with a double ring infiltrometer by the falling head method. Flow is also measured at the inlets of the 10 individual bioswales. At these bioswales, large tipping buckets (1 gal/tip, United Concrete Products™) were installed and coupled to event loggers, and are measuring flow into each bioswale continuously.

Researchers are also measuring water quality to better understand the effectiveness of bioswales in the study area. The water quality parameters measured in this study are total suspended solids (TSS), ammonium nitrogen nitrogen (NH4+-N), total nitrogen (TN), and orthophosphate (ortho-P). Nitrate nitrogen (NO3--N) will be measured if it is found to be significant compared to TN, though we expect this is unlikely in combined sewage. These contaminants are known to be removed to some degree by bioswale infiltration. To assess the reduction in pollution, combined sewage samples are being collected for 6 storms during the project at both monitored sites, approximately every two months. By measuring the quantity of water entering individual bioswales and assessing discharge leaving the sub-sewershed outlets, we will be able to quantify the benefits of new bioswales in reducing stormwater runoff and improving water quality.

The Downtown Watershed Project aims to decrease stormwater overloads to New Haven’s conveyance system and improve the quality of stormwater draining into New Haven Harbor and Long Island Sound. Our research will provide important insight into the effectiveness of bioswales to inform the design of future bioswales and educate municipalities about the benefits of integrating green infrastructure into their communities. Check back here as results from our Downtown Watershed Project study are updated throughout the rest of the study period!

Monitoring the performance of the bioswales installed in the downtown sub-sewersheds was made possible by the National Fish and Wildlife Foundation.

Research results showed that bioswales of the design we used were very effective in reducing stormflows and preventing pollution. Comparison of whole sewershed flows before and after bioswale installation indicated that that 37% and 44% of the total rainfall was passing to the storm drain systems before bioswale installation. This seems reasonable considering the high level of imperviousness and expected losses to evapotranspiration. After installation, these numbers dropped to 9.4% and 13.2%, indicating that bioswales diverted 75% and 70% of storm runoff in the Chapel and Elm St sewersheds, respectively. These very high levels of storm water diversion represent a dramatic success of the bioswales.

Please stay tuned for more updates on our research results! 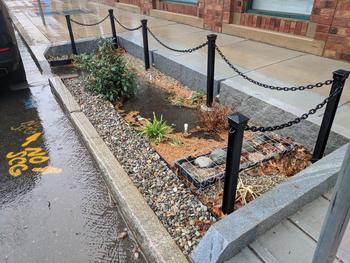 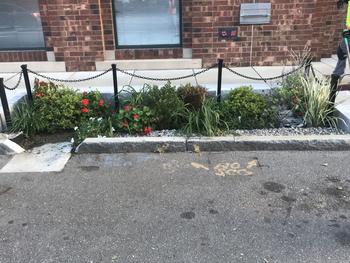 Bioswale located on Whitney Avenue performing as expected during a heavy rain event shortly after construction (left), and the same bioswale fully planted later in the year, ready for more rain (right).